Details from the “Castling – Hradovanie – Váralás” exhibition currently on view in the Fiľakovo Castle Museum, Slovakia until 13 September 2013.

A partial panoramic view of the Castling exhibition.

What might the visual folklore of people who find themselves between multiple cultures (such as immigrants of mixed ethnic and cultural backgrounds) look like? What is the influence of the built environment on the formation of the self? I explore these questions within the context of the historical relations between Saskatchewan, my home province, and Central Europe.

In the middle of the Canadian Prairies, in the centre of the city of Saskatoon, stands the grand Bessborough Hotel – built in the style of a Central-European castle. Having been constructed by a railway company in the 1930’s, it has served the migration of people both literally and symbolically.

Since 1885 thousands of Hungarians and Slovaks have gone to Saskatchewan in search of a new home (there is even a hamlet there called “Otthon” – ’Home’ in Hungarian). To many residents and newcomers, Saskatoon’s “castle” must have been both a reminder of their Central-European roots and an expression of the Canadian Dream of opportunity and prosperity.

In this exhibition, I have used the symbolic connection between the Castle of Fiľakovo (Fülek), a historical town inhabited by Hungarians, Slovaks and Romani, and the “Castle” of Saskatoon (The Bessborough Hotel) as a departure point for exploring the questions and dilemmas of leaving and staying in one place, and the implications of those decisions for individuals and their communities.

This project serves both as an occasion and a medium for connecting the communities of Saskatoon and Fiľakovo (and by implication, Canada and Central Europe). By drawing on the urban imagery of both places, I explore a methodology for creating a migrant visual folklore. The approach involves translation, transformation and distortion – like the immigrant experience itself.

In the first part of the exhibition that takes place in Fiľakovo, elements of the Saskatoon urban landscape have been used to construct images, patterns, and text.

In part two, art work will be created from the urban imagery of Fiľakovo, to be exhibited in Saskatoon, thus completing the construction of a “castle bridge” connecting the two communities through art and imagination.

The following images together illustrate how modular small-scale drawings based on Saskatoon have been developed into textile works (influenced by Hungarian, Slovak and Romani folk culture) specifically for the Fiľakovo Castle: 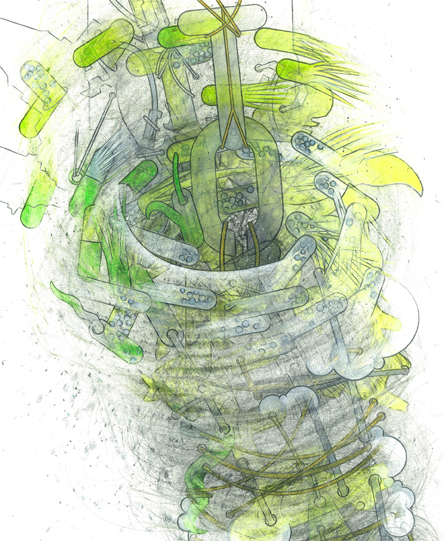 Scans of original coloured-pencil drawings were used as components for building patterns, letterforms and animation. Two examples of such drawings appear above (Tornado) and below (Ant). 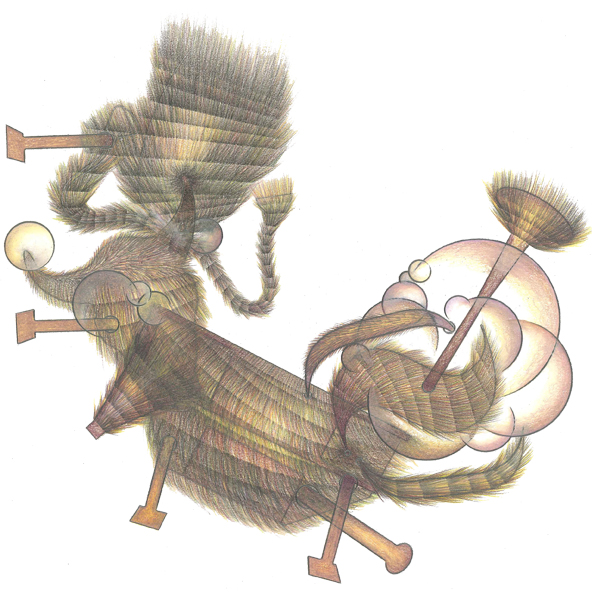 Saskatoon imagery was embedded in each original component drawing; Ant includes the silhouettes of signage and lights from the Little Chief Service Station in Riversdale, The Bessborough Hotel turret, a Loraas disposal dumpster, a buffalo skull from Wanuskewin, the Safeway grocery store logo, and fragments of public furniture.

The theme of habitation in Castling was approached through the use of fabric. Home-making is particularly problematic for the itinerant and the settler. Thus, the deliberate reference to domestic fabrics.

Inspired by the poppy motif found in Hungarian folk art and textiles, the above digital composite image was created by combining the original drawings Canopy, Ant, Crop Circle, and Yellow Arms.

The abbreviation “SK” (as in “Slovakia” and “Saskatchewan”) is embedded in this textile repeat pattern. The print is an arrangement of the drawings Tornado, V, Canopy, Yellow Arms, Crop Circle, Comb, Buttress, Tower, Tarp, and Eyes). 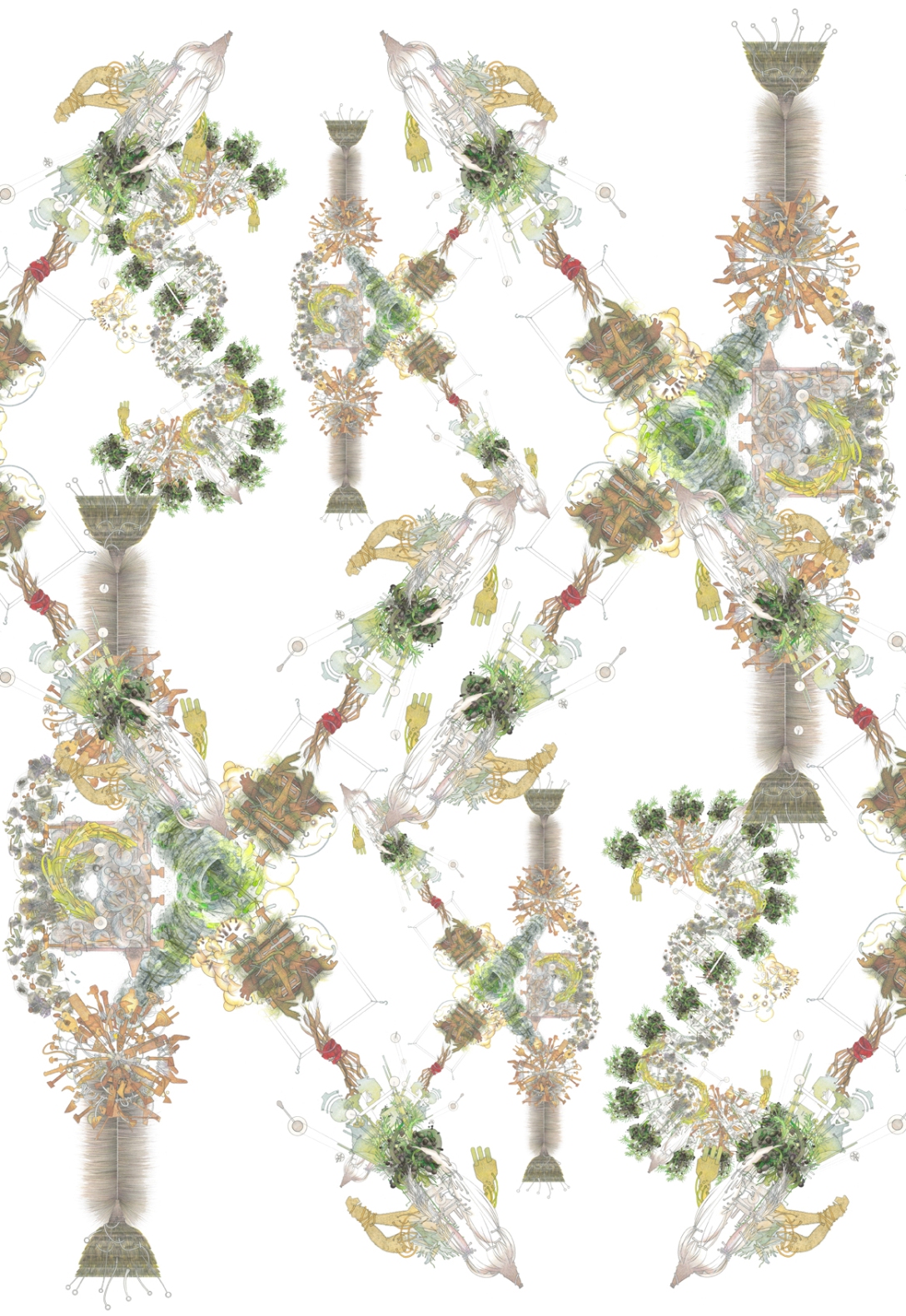 A series of printed canvas ‘tarpaulins’ have been installed in front of the windows of the 5th floor interior of the Bebek Tower. The use of windows references the cyclical nature of both folkloric tradition and life patterns affected by diurnal light changes.

Templates made invisible and ‘tarpaulins‘ illuminated by natural window light. 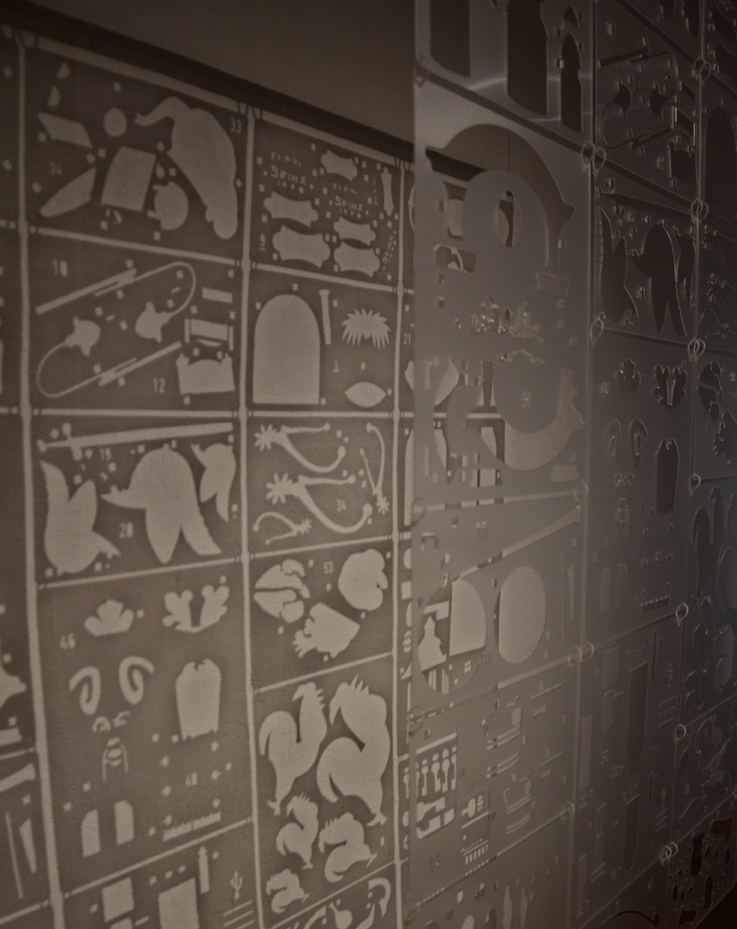 Stencils allude to the given objects and surroundings which pre-exist individuals. Traditions, values and habits expressed in the built environment are like shadows cast by the dreams and aspirations of one’s predecessors.

These silhouettes of familiar Fiľakovo landmarks and archelogical finds from the Fiľakovo Castle Museum collection will to be used to make art work for part two of the show in Canada.

This project is supported by the Saskatchewan Arts Board, the Town of Fiľakovo, Fiľakovo Castle Museum, Escape Studios, London (UK), and Pro-Touch Engraving.

All images on this site by Tammy Lu are licensed under a Creative Commons Attribution-NonCommercial-NoDerivs 3.0 Unported License, unless otherwise stated.
The support of the Saskatchewan Arts Board is gratefully acknowledged.